Lies and prides on the middle east... nothing new afterall... 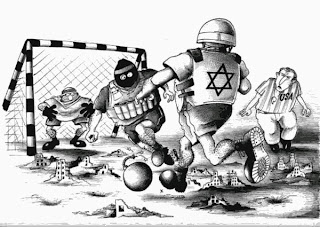 There's time since I ve not witten in english. I think that my tiny domain of this language deserves from me a special atention.

Sleeped... no way... tired... for nothing ... expecting... for what? Maybe the summer will bring to my brilliant head new ideas... but anyway, I woke up yesterday.

The last book I've been reading ... "Israel, dream and tragedy" Joan B Culla... one of my masters in the Universitat Autonoma of Barcelona. A great historician and a good friend of the jewish culture (as I am) .

The news were really bad... the Tsahal attacked a fleet of ONG and killed 10 people. Everydody was excited and angried here. There're 2 catalans jailed by the Israelian authorities, and the intertational press and the europeans goverments blamed the action of the Nethanyahu goverment. The same song and music we use to heard, so many times. Our goverment called the israelian embassy and protest the action and the result. The arab countries, Iran and Turkey cry for justice...

Too easy to judge, too easy...

So I thought. Nothing is too easy.

The Turkish fleet carried medicins and food for the Gaza string unable to carry it by land... and I asked... why? Looking about the convoy I saw this "IHH"... an organization created to aid the muslims in the Bosnian war in 1991, that have actions in Pakistan, Checheny and 120 countries, many of them muslims. IHH is not recognized in Israel because its relations with the "zakat", and as many say, with HAMAS.
So... if the result of the action is a surprise, why an organization that have not authority in Israel try to reach the Israelian watters?
It was the ninth attemp to break the israelian "block" by sea, and their insistence to arrive to Gaza has been interpreted by Israel of an menace...

The other way is to attack the ships in the international watters and open fire to the people who were in the ships. Israel has acted on this ways since 1956, when they think there's a menace, so they act in consequence. Nothing new afterall.
Who is the fool that planned the operation? what did he expect? What has been the price and the benefits of the action? were there other ways? Why did they refuse the board of the israelian troops? All is really strange.

The usual countries (Iran, Lebannon and Siria) condemed the attack with energy and Turkey (the IHH is a turkish organization) ask for consequences... as I can imagine, the turkish prime minister has an advantage with this action. And the information I read from Israel confirms it.

Turkey is in a dificult crossroad, the target point of the reislamic wave that is invading all the arab countries, with a prime minister Recep Tayip Erdogan with the intention of changing the constitution to allow the religious people to normalize their situation, and, (in my opinion) to destroy the laic state. The option of the islamic forces in turkey is to near the objectives and thought with the rest of the muslim countries, and the victim, ones more is Palestine. Two months before the project about the constitution Erdogan has the "motive" to test the muslim sense in his own country, and to redirect the angry toward their old allied...

Anyway, the israelian premier Benjamin Nethanyahu is showing his incompetence to read in the international theather, as he did in 1998 with Lebbanon, the action under his command will provoque a deep wound not only in the region, aslo in his own society. Israel is a democracy that acts always in a extreme agony mode... showing the crawls as soon as feel the menace... unless this menace, like this time, is only a ghost.

And the palestinian... well, fucked and used as puppets again by everybody, will suffer the rage of israel again and the hipocresy of the rest of the arabs. Unabled to create another dialogue, embrace Hamas and The Muslim Brothers, the religion and the same history, words and quimeric fevers as always. Meanwhile, the dream of an own state will disapear killed by their own dreams of "total victory"... because one thing is sure, the israelians will fought hard to defend the land they has defended these 60 years, and without doubth, Israel will prevail.

And afterall, I love that land: Israel, Palestine, Siria, Lebbanon and Jordan, I would like to travel around all this countries again and discover new ones like Irak, Persia or Egypt... as the people says here "there's not an evil that last 100 years"... we hope it.
Publicado por el tropilla en 14:58 3 comentarios: 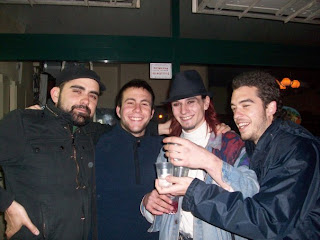 Great expedition of 3 wise men to the City of Heaven... who better than us! 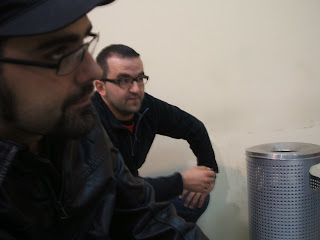 4 hours waiting in the Israel`s border, your face can be like this... 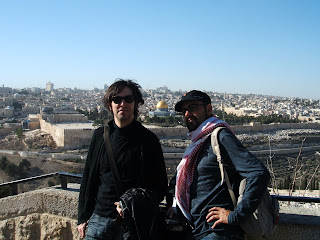 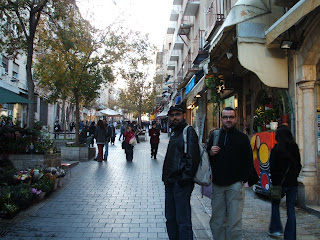 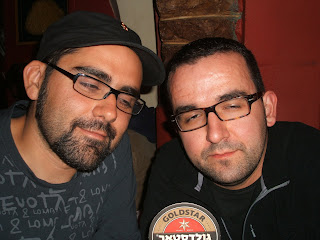